Higher Taxes & Caution in Marketing Can Keep Weed Away From Kids 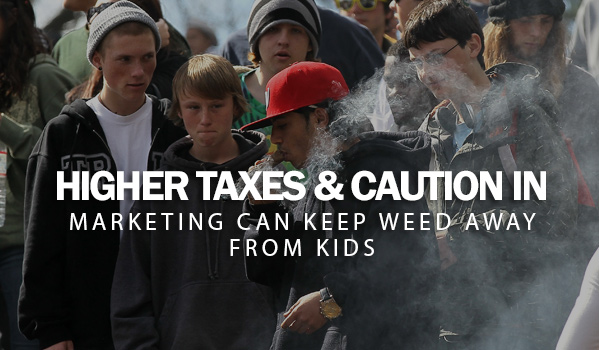 Even though several US states have voted to legalize marijuana, it’s still not clear how best to regulate it. But there are steps that legislators can take to prevent the newly legal drug from falling into the hands of minors, according to researchers from Johns Hopkins University’s Bloomberg School of Public Health. A new report in the medical journal Pediatrics outlines four tested tactics for proposed regulation.

Colorado, Washington, Oregon, Alaska, and Washington, DC have passed laws legalizing the recreational use of marijuana, and the use of medical marijuana is legal in 23 states and the District of Columbia. While 14 US states have decriminalization laws in place, which reduce the severity of sentencing for marijuana-related crimes, the report’s authors argue that legalization and regulation, not decriminalization, will ultimately lead to the safest use and distribution of marijuana.

The relative novelty of legalized weed creates an opportunity for regulators to choose how best to approach marijuana, says Brendan Saloner, an assistant professor in the Department of Health Policy and Management at the Bloomberg School. “There’s a window of opportunity here. The window doesn’t fully close, but the reality is there’s a much greater momentum to try to think about smart regulatory approaches early on,” Saloner said. “Our message is that state legislatures can seize this opportunity now while the issue is still fresh in the agenda.”

The report suggests states can apply four strategies to limit the ways in which legal marijuana can enter the illegal market and reach kids: increase taxes on the drug, regulate retail stores where marijuana is sold, regulate packaging, and limit the use of marketing. For the most effective regulation, Saloner says these tactics should be used in tandem, rather than selectively.

Saloner says the existing regulations surrounding alcohol and tobacco provide a useful context for marijuana. “There’s a precedent in alcohol and tobacco regulation,” Saloner said. “Price is a big factor in initiation and use of both cigarettes and alcohol among underage youth.” And because it’s nearly impossible to prevent legal marijuana from entering the black market, higher taxes on legal weed will in turn increase the price of illegal weed.

The report also calls for strict monitoring of the marijuana supply chain, which includes the development of licensing policies that can be applied to all “actors” in the chain. The authors argue that states should strongly enforce existing laws penalizing dispensaries from selling marijuana to minors. These dispensaries should also be prevented from opening near institutions where children are often present, like schools and playgrounds.

THE POTENCY OF MARIJUANA HAS INCREASED OVER THE PAST DECADE

Edibles are more of a concern to the authors than weed that’s meant to be smoked. In part, that’s because edibles are often sweets like candies and brownies — sweets that appeal to children and can easily be mistaken for being drug-free. Edibles are also more likely to contain higher doses of tetrahydrocannabinol, or THC, the chemical responsible for most of marijuana’s effects. The authors of the report suggest manufacturers use child-resistant seals and refrain from using packaging that will appeal to children, so that kids don’t accidentally eat marijuana-laced baked goods.

Just as tobacco companies are banned from television markets in the US, the marketing of marijuana can also be limited. For example, marketers can avoid broadcasting during children’s television shows or on social media. Although online advertising is not regulated, some companies, like Google, already voluntarily refuse to host marijuana advertisements.

One potential roadblock in making sure legal weed only reaches the intended customer is home cultivation. Because home cultivation is currently allowed in every state that has legalized recreational marijuana (excluding Washington), regulating these jurisdictions becomes more difficult. “It’s an area where there’s going to have to be a little bit of learning going on to strike an appropriate balance between people’s civil liberties and trying to think a little bit more about how to protect children,” Saloner said.

“IT’S AN AREA WHERE THERE’S GOING TO HAVE TO BE A LITTLE BIT OF LEARNING GOING ON.”

In recent years, Colorado and Washington have both adopted comprehensive requirements for the packaging of retail marijuana to prevent use by minors, but Saloner says regulation could be stronger in all states. Marijuana is still illegal on a national level — despite a recently introduced bill hoping to reclassify it as a medical drug — but the federal government has said it is unlikely to exert authority if individual states have voted for legalization.