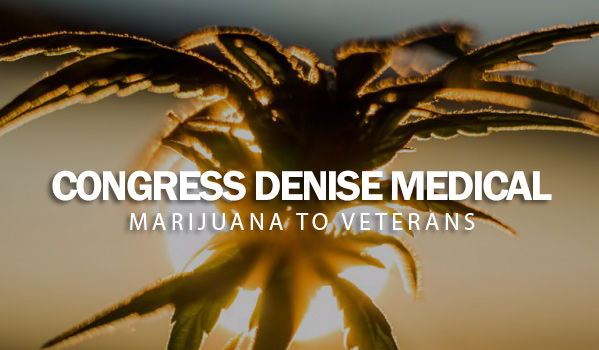 Congress simply refuses to give in on the issue of allowing American veterans safe access to medical marijuana.

Earlier this week, the House of Representatives gathered on Capitol Hill to hash out the details of an amendment to the Military Construction and Veterans Affairs Appropriations Bill, which would have allowed physicians working with the Veterans Administration to recommend medical marijuana to their patients.

Unfortunately, while most Democrats stood in support of the proposal, aimed at preventing VA funds from being used to support a prohibitionary stance, the opposing forces of the Republican majority were enough to ensure the amendment had no chance of making it out alive. The measure failed in a vote of 213-210.

Representative Earl Blumenauer of Oregon, the lawmaker who introduced the amendment, said he was disheartened by the congressional decision. Although the measure would have allowed VA physicians to discuss marijuana as a potential treatment option, he explained, it would not have given them the authority to write prescriptions for the herb. The goal of the amendment was to simply allow veterans and the doctors overseeing their care to work together in determining whether medical marijuana could be used as an alternative to prescription medication.

Although 23 states and the District of Columbia have legalized medical marijuana programs, veterans living in those areas are restricted from participating because federal law prevents physicians working at the VA from even discussing the possibility of cannabis as a treatment option, much less offer a recommendation. A favorable congressional vote, however, would have at least opened up the issue for debate, benefiting  thousands of veterans.

The latest statistics from the Veterans Administration find that 30 percent of the men and women who served in Afghanistan and Iraq suffer from post-traumatic stress disorder and severe depression—two common afflictions for which medical marijuana has been found to effectively alleviate symptoms.

Yet, the Republicans who opposed Blumenauer’s amendment argued that there is not enough evidence to suggest that marijuana has any medicinal benefit at all.

Optimistically speaking, marijuana advocates believe that since the amendment failed by such a narrow vote, there is a distinct possibility it could pass if it reaches the House again next year.

“While it’s disappointing that the House just voted to continue a senseless rule that prevents doctors from treating military veterans with a medicine proven to work for a number of serious conditions, the fact that we came so close is a good sign of things to come,” Tom Angell, chairman of Marijuana Majority, said in a statement.