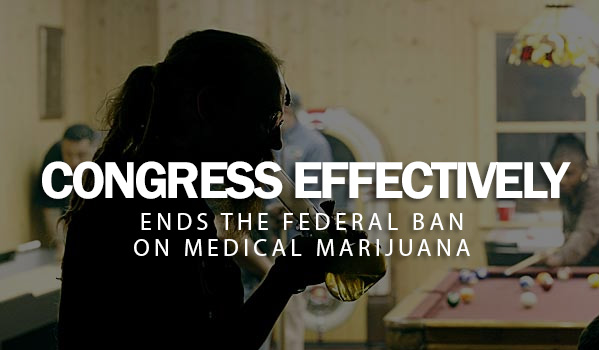 It seems the controversial $1.1T spending bill that is preventing the U.S. government from shutting down is chock full of surprises. As you may know, much to the dismay of marijuana activists and lovers of democracy everywhere, the bill smacked down Washington DCs referendum that legalized recreational marijuana in the nation’s capital. What you may have missed (because those shifty politicians are doing everything under the table) is that the bill also quietly, but effectively lifted the federal ban on medical marijuana.

In the depths of the 1,603-page document is a provision that prohibits federal agents from raiding retail medical cannabis operations in states that have legalized medical cannabis. The passage represents “the first time in decades that the federal government has curtailed its oppressive prohibition of marijuana,” the measure’s co-author, Rep. Dana Rohrabacher, told the LA Times.

Though President Obama has generally favored this approach policy-wise, the passage of the bill also ensures that the next president can’t backtrack and begin busting medical cannabis operations.

The full text of the measure reads as such:

“Sec. 538. None of the funds made available in this Act to the Department of Justice may be used, with respect to the States of Alabama, Alaska, Arizona, California, Colorado, Connecticut, Delaware, District of Columbia, Florida, Hawaii, Illinois, Iowa, Kentucky, Maine, Maryland, Massachusetts, Michigan, Minnesota, Mississippi, Missouri, Montana, Nevada, New Hampshire, New Jersey, New Mexico, Oregon, Rhode Island, South Carolina, Tennessee, Utah, Vermont, Washington, and Wisconsin, to prevent such States from implementing their own State laws that authorize the use, distribution, possession, or cultivation of medical marijuana. Sec. 539. None of the funds made available by this Act may be used in contravention of section 7606 (“Legitimacy of Industrial Hemp Research”) of the Agricultural Act of 2014 (Public Law 113-79) by the Department of Justice or the Drug Enforcement Administration.”

Important to note is that this legislation is fully in light of the fact that marijuana is considered a Schedule I drug with “no medical uses” by federal standards. Seeing as how logically this does not work, this folks, must represent the beginning of the end for marijuana prohibition — especially from the point of view of Congress.

Now that there will be little threat of backlash from the federal government, it’s time to lobby your state for the legalization of medical marijuana if you live in one of the 18 states where it is outrageously outlawed. No excuses. Onwards and upwards to completely legal, recreational and medical marijuana for all!