Crohn’s disease is a serious inflammation of the digestive system. It usually effects the intestines, causing severe pain for the sufferer. There are thousands of people that suffer from Crohn’s. The disease causes abdominal pain, fatigue, loss of appetite, fever, and weight loss, among other more unpleasant symptoms. The treatment of Crohn’s consists of strict diets, vitamins, and antibiotics, some of which I can’t even pronounce. But as always, cannabis shows that it’s qualities far surpass our expectations. 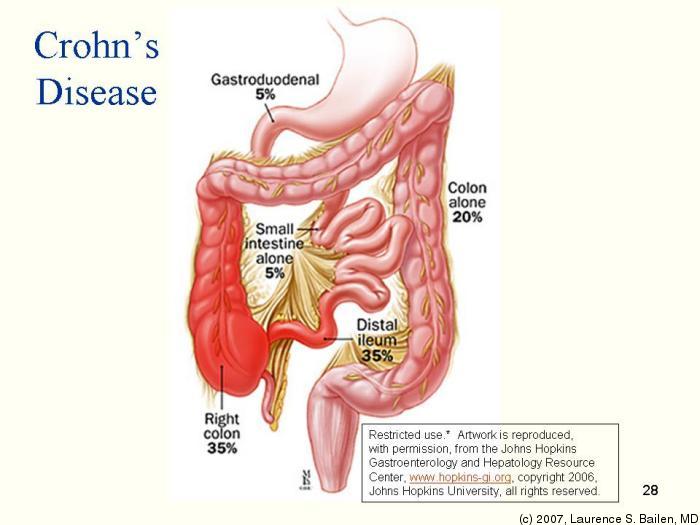 Those that are diagnosed with Crohn’s disease also suffer from the effects of increased stress. When the patients is dealing with a stressful time in life, working, or sudden loss/change, the Crohn’s can get worse. But as cannabis is a huge stress diffuser, it can prevent the patient from getting to the point where they are in pain. By ingesting marijuana, Crohn’s patients are able to relieve some of their stress, while simultaneously decreasing pain levels. Marijuana has anti-inflammatory qualities that Crohn’s patients swear help them to go about their day normally.

Data from experiments shows that people afflicted with intestinal inflammation have far more cannabinoid receptors in their colonic tissue. Patients with extreme pain, surgery history, and a lower quality of life seem to really enjoy the effects that marijuana has on their health. It allows them to feel happier and normal, while reducing their symptoms. Unfortunately, there isn’t a lot of specific scientific information regarding patients and Crohn’s, as is typical, seeing as how cannabis research is restricted by the illegality of the plant.

Living with constant abdominal pain is terrible in itself. But with medicines that may or may not work, what other choice do patients have but to turn to medical marijuana? Not only that but it’s safer to ingest THC and CBD rather than pills that may have adverse side effects. Even though people still argue that smoking cannabis isn’t healthy, the amount of nutritional medicated recipes is staggering. Even on strict diets, Crohn’s patients can live better by ingesting cannabis with their normal, healthy diet.

One thought on “Cannabis And Crohn’s”