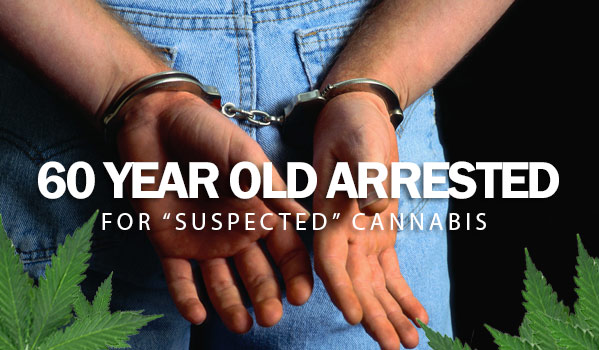 When cops get permission to do a drug bust, they should do their research first. And by that, I mean they should validate the reports from “concerned citizens” when someone is reportedly doing something wrong. First of all, when people are suspected of growing or consuming cannabis, the cops should just leave them alone. We all know that. There are so many other problems in the world that police should be concerned with. But it is still illegal and the cops still bust down doors to get rid of the “criminals”, who get reported by a pissed off neighbor that may or may not have any idea what they’re talking about.

In Derby, a 60 year old man was arrested when cops stormed his house, looking for cannabis plants. Inspector Paul Cannon, the man in charge of the police in the area, said, “This information came from a call from a concerned resident and we are always happy to act on calls such as this that we receive.” But according to the report, all that was found were plants that are suspected to be cannabis… Leading readers to think that these cops actually don’t know what cannabis is or what they were looking for when they stormed in to the man’s house.

In the residence, there were 30 plants found but whether or not they were actually cannabis is unknown. The man arrested is being held in police custody and being questioned about the alleged offense. But much like the agents who busted in the doors of an okra farm recently (they thought it was weed… Really? Talk about a waste of money), stories like this only reinforce the idea that cops are overzealous when it comes to trying to bring down cannabis users and growers.

With a huge opiate issue growing in the world, not to mention other terrifying drugs such as spice, crocadill, and liquid heroin (which is increasingly popular among young teens because of it’s innocent appearance), the cops should be paying more attention to real problems. Not only that but the bath salts can now be manipulated to become other, more dangerous chemicals. If the cops really want to waste their time busting people for things that they suspect might be illegal, instead of taking care of the real drug issues that we have, then really, what is the point of their jobs in the first place?