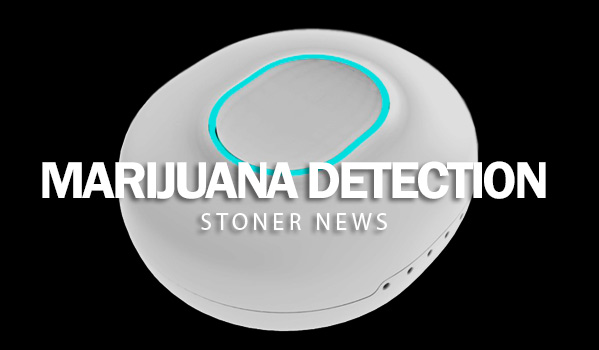 The mad scientists of marijuana prohibition are hell bent on sucking all the fun out of getting stoned in hotel rooms and rental properties with the invention of a new smoke detector that detects marijuana compounds. Designed primarily as a tattletale mechanism for landlords and the hotel industry, AirGuard works very similar to a smoke detector but rather than sound an obnoxious alarm, this mechanical rat sends a wifi message to a party of interest explaining that their tenant has just sparked up a joint.
What makes the inception of this intrusive doobie detector so frightening is that it exposes second and third hand marijuana smoke, which means it can alert even if a person’s clothing reeks of weed. Although the majority of property owners and hotel managers will not concern themselves with a stoner’s smelly sweatshirt, it is believed this particular aspect of the device will be used to reveal traces of smoke in the carpet and furniture — a feature that could force tenants to forfeit security deposits for failing to adhere to no smoking policies.
AirGuard will be available in two devious models: a plug-in detector that fits into the typical electrical outlet and a wearable unit that fits into the palm of your hand. The outlet model will connect to a network via wifi, while the handheld version will activate using an Android app via Bluetooth.
Fresh Air Sensor Corporation, the company responsible for the development of this product, claims hotels, multi-unit complexes and even college dormitories will have the option of sending the smoke signal directly to the property owner, or even the police, which could pose some serious legal issues for those residing in prohibition states.
And you can forget about all of those old school methods used for foiling traditional smoke detection systems — AirGuard claims to be tamper proof and impervious to stoner ingenuity.
The device is set to launch in the Spring of 2015.
Mike Adams writes for stoners and smut enthusiasts in HIGH TIMES, Playboy’s The Smoking Jacket and Hustler Magazine. You can follow him on Twitter @adamssoup and on Facebook/mikeadams73.