Ice In The Bong; Yes Or No? 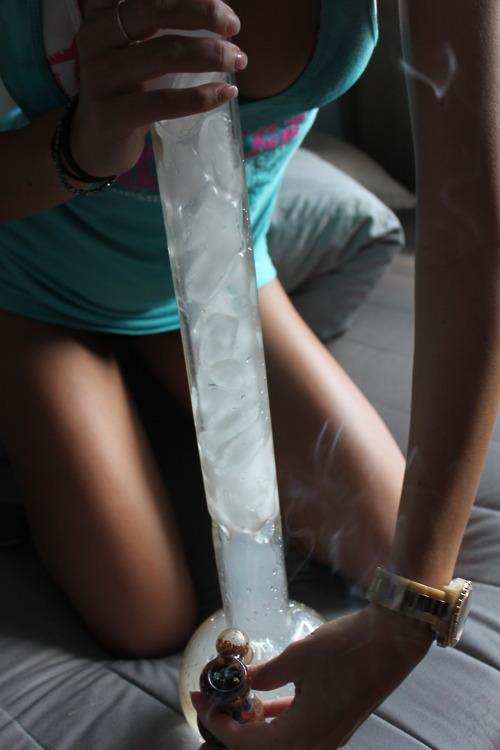 Most bongs that are on the market today come equipped with ice catchers. This added tool makes it possible for you to put ice cubes in your bong, which people like because it cools the smoke before you inhale it. However, there are some rumors surrounding ice in bongs. While it may cool the smoke, you’re also inhaling a ton of water vapor from the ice cubes. This can lead to severe bronchitis and lung problems, as inhaling too much water vapor isn’t good for your lungs.

When the hot smoke from the bowl passes over the cubes in the bong, the ice melts in to the smoke, which goes straight to your lungs. It’s extremely difficult for me to find any sort of studies relating to this issue. Mostly, it’s all forums of stoners bickering back and forth about their opinions. I turned to the E-cigs that people are smoking these days. While the Cigs aren’t the same as ice in a bong, the selling point is that you’re inhaling water vapor, rather than smoke. Unfortunately, Dr. Mike Feinstein – a spokesman for the American Lung Association – says that these products are unsafe and are potentially worse than actual cigarettes.

In my personal experience, ice in a bong hurts the hell out of my lungs. As someone who has suffered from severe bronchitis due to over inhalation of second hand smoke, I can definitely feel the difference between a bong with ice and one without. When I smoke a bong with ice in it, it’s almost like the smoke freezes in my lungs, making it extremely hard to breathe. When I smoke without ice, this feeling doesn’t happen. I’m not sure if my lungs are just damaged because I used to smoke cigarettes and because of the bronchitis but I do not smoke with ice in my bongs… Ever. If I want to cool the smoke down, I fill my bong with water that’s been in the refrigerator. That way, I’m inhaling just the smoke, without the vapor from the cubes.

As I stated before, there really is no right answer to this question. My personal belief is that you shouldn’t put ice in your bong. But that’s just me. Smoking itself can be argued about whether or not it’s healthy. There are most certainly healthier ways to get high other than smoking. It all comes down to what you think you should do. Cold water in the bong works perfectly for me although I definitely prefer to eat my weed over anything else. Be healthy and safe, fellow stoners! 🙂