Vaporizer: noun 1. an electric apparatus that uses a heated glass or metal plate to extract the active ingredients in cannabis, as opposed to a flame, providing a purer inhalant of vapor versus smoke

Origin: the Vaporbrothers produced the first vaporizers for cannabis consumers

Example: “I love using vaporizers because they emit no odor so I don’t bother my roommates.”

Believe it or not, vaporizers have been around since the 1920s, but back then they weren’t using them to vape up chunks of Purple Granddad. Vaporizers began as a piece of high-tech medical equipment used to administer anesthesia. This technological advance made life saving procedures possible by carefully controlling anesthetics during surgery. Fast forward about 90 years to the age of medical marijuana. Vaporizers are the preferred method of ingestion for many medical users of this life saving plant. Several private studies, as well as a few university studies, have suggested that vaporization is a healthier, if not the healthiest, way to consume chronic meds. Because doctors are not likely to recommend you to smoke anything as a way to medicate, vaporizers provide a doctor with an ingestion method they can both respect and agree with. Many patients who medicate for lung, mouth and throat ailments often caused by smoke have found solace in the world of vaporization, still able to receive the benefits of medical marijuana use without the negative effects.

This in turn has lead to a boom in the vaporizing market. 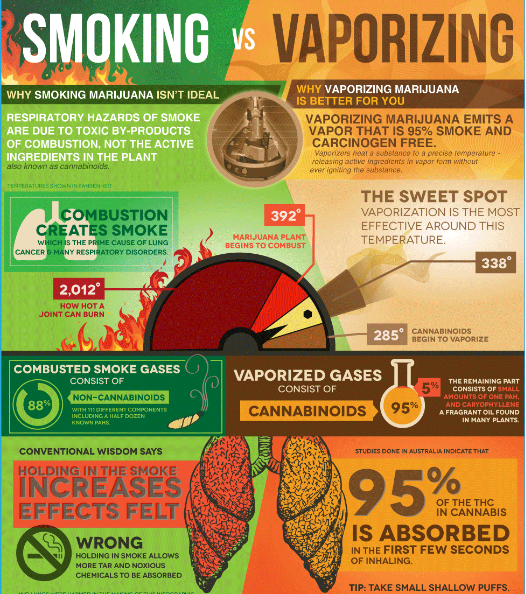 Now, even you can own a piece of this space age technology. Bud vaporizers, like bongs, come in many shapes and sizes, but wait there’s a bit of a twist. These modern medicaters also come with an array of high-tech additions. Some vaporizers come with temperature control devices while other electric bongs are automatic and water cooled. Vaporizers also use different heating methods: conduction, convection, and thermal radiation are all very efficient ways to deliver the goods. Conduction vaporizers heat your greens through direct contact. This means that the element that transfers the heat, which is either glass or metal, is applied directly to the marijuana buds, which creates a tar and carcinogen free vapor. Convection vaporizers are the most common and function similar to an oven, where your greens are heated via air. That is, air passes through the heating element and essentially toasts your weed, also providing a clean tar and carcinogen free vapor.

Thermal radiation vaporizers are the rarest of the three but also the most efficient.

This method uses radiant energy from a heat or light source which causes the temperature of your buds to rise. This provides the most uniform heating of your greens and delivers the most concentrated vapors. An example of thermal radiation vaporizing would be lighting a packed pipe with a magnifying glass on a beautiful sunny day. Best if performed at high noon, if you have the patience to accomplish this little science experiment, you will definitely reap the rewards. Less combustible material and lower heat temperatures allow cannabis connoisseurs the ability to take big tasty tokes of the most medical plant in the galaxy without the irritation caused by smoke.