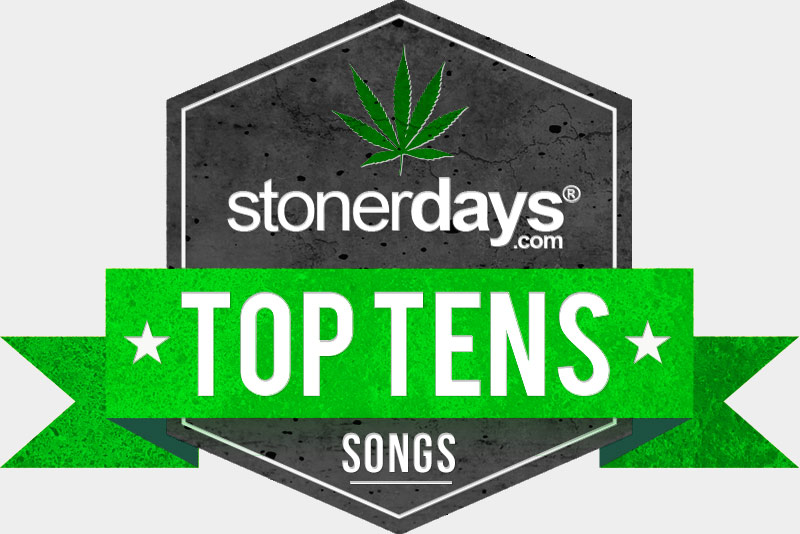 Originally written by The Toyes, in 1983, Sublime made this song a legend on their 1992 debut album 40 oz. to Freedom. “Smoke Two Joints” was their second song to air on the radio after “Date Rape.” The intro of the Sublime version is a sample from the 1970 film Beyond the Valley of the Dolls but also features samples of a bong toke, Eazy E, Just Ice, and Bert Suzanka, the lead singer of The Ziggens. This song has become a huge part of stoner culture and is even used in the movie Mallrats. Here’s to you Bradley!

The title track of the album Kaya released by Bob Marley and the Wailers in 1978, its namesake is a Jamaican slang term for marijuana. Interestingly enough, it is actually a name with many unique meanings. In Japanese and Zulu, it is an expression meaning “home,” in Hopi this name means “wise child,” and appropriately enough, in Turkish Kaya means “stone.” This song’s fluid lyrics and soothing rhythm is an ideal soundtrack for spending a relaxing evening with Miss Mary Jane.

A funky stoner anthem released by the late Rick James in 1978 off his debut album Come Get It!, “Mary Jane” quickly peaked at top 5 on the R&B charts in the US. This song was one of the first written in the genre that Rick James branded as “punk funk.” “Mary Jane” is written about an actual woman who broke his heart. James uses a personification of marijuana to describe this mystery woman and convey that the effects of her love are similar to the effects of marijuana. Though she is not the type of woman “you can just tie down,” he will always “love her just the same.”

“I Wanna Get High” by Cypress Hill

Opening up Cypress Hill’s second album, Black Sunday, released in 1993, “I Wanna Get High” quickly became a stoner anthem. The album debuted at number one on the Billboard 200 that year and eventually went Triple Platinum in the US. “I Wanna Get High“, along with “Hits From the Bong,” can be found on the How High soundtrack (a film listed in our Top 10 Stoner Movies) as well as Hempilation, a High Times sponsored compilation album created to support NORML (National Organization for the Reform of Marijuana Laws). Of all the times I have been to Cypress Hill shows, this track will always remain my favorite to see live, as they pass their pristine bong around the stage to each other, smoking a bowl with a venue full of smiling stoners.

“Legalize It” by Peter Tosh

“Legalize It,” off the album of the same name, remains one of the most influential songs in marijuana history. Recorded in Kingston, Jamaica and released in 1976, the album Legalize It was Peter Tosh’s first solo album after leaving the Wailers in 1975. The song is an attempt to debunk the stereotypes of stoners with lyrics like “judges smoke it, even the lawyer too” and “it’s good for the flu, it’s good for asthma, good for tuberculosis, even umara composis,” which is supposedly a euphemism for menstrual cramps and rumored to be a reference to the factoid that Queen Victoria used to medicate with cannabis to relieve said pains.

“Acid Raindrops” by People Under the Stairs

People Under the Stairs is a Los Angeles hip hop group formed in 1997 by The Ones and Double K. “Acid Raindrops” is off of their third album O.S.T. (Original Soundtrack) released in June of 2002. One of their most critically acclaimed songs, this track is a reflection of their classic hip hop roots exhibiting their fluid rhythms and poetic lyrics. At the end of the day, there’s nothing like sparking a bowl, putting your feet up, and listening to these reassuring lyrics: “when the stress burns my brain just like acid raindrops, Mary Jane is the only thing that makes the pain stop. I let the music take over my soul, body and mind, to kick back, relax, one time and you will find…”

One of the oldest songs about marijuana, “Reefer Man” debuted in the 1933 film titled International House and is written about a man who likes to smoke on those sweet cigarettes. Cab Calloway was a legendary American bandleader and jazz and scat singer, regularly performing at the Cotton Club in Harlem, New York. He was even attributed to being the predecessor of Michael Jackson’s moonwalk. This notorious dance move can be seen in many of his early films and fifty years later he was quoted saying that “it was called The Buzz back then.”

“Sweet Leaf” was released in 1971 and is the opening track of Black Sabbath’s third album Master of Reality. This album has actually been coined by many as the first stoner rock album. Written as an ode about recreational marijuana use, “Sweet Leaf” was actually named after a brand of cigarettes that bassist Geezer Butler bought in Dublin, Ireland. Sweet leaf is also a moniker for stevia, an herb which is indigenous to subtropical North and South America and used as a sweetener, sometimes as a replacement for traditional sugar.

Though originally recorded by The Coasters in 1965 and written by Nickolas Ashford, Valerie Simpson, and Josephine Armstead, it was not a number one R&B hit until 1966 when Ray Charles recorded it shortly after he was released from rehab after battling a crippling heroin addiction. It is rumored that his post-rehab recovery was aided by cannabis, coinciding with the release of this song. Though it was a number one hit, it has become one of his lesser known songs of our generation. Ray Charles is more popular for his romantic and classic hits like “Georgia on My Mind“ and “Hit the Road Jack.” It is beautiful to see the evolution and long history of the influential role that marijuana has played on music.

“I Smoke Every Weed” by Walker Young

Definitely the newest song on this countdown, this track was made famous by the hilarious documentary Super High Me released in 2007 conceived and starring famous pot comedian Doug Benson. As the anthem of this film played during the end credits, it is definitely the first popular song about medical marijuana. Upbeat bluegrass style acoustic guitar is sang over by Walker Young’s southern country voice as he describes various familiar strains of weed like Alaskan Thunderfuck and AK-47. He also mentions choosing from these strains at his “pharmacy” and then enjoying an always pleasant “Volcano to the brain.” Though this is Walker Young’s only well-known song (for now), it is the most prevalent one written about weed today, showing how much perception about marijuana and its role in society has changed.