Too Stoned? Order Your Whopper Online! 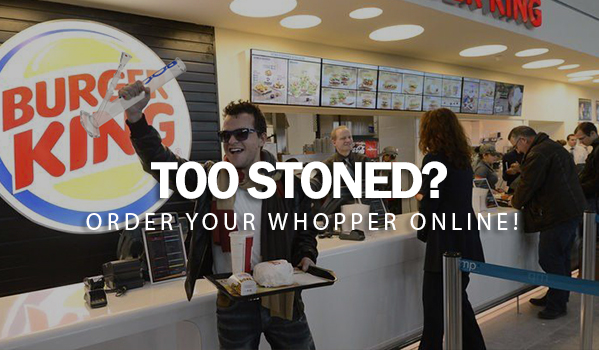 So in probably the biggest news of the day, it was announced earlier that Burger King is rolling out online ordering and delivery. The trial is being rolled out in 8 locations across the UK, with delivery windows happening from noon to 3pm and 6pm to 10pm. This comes as a rather sobering development…since when does America lag behind anyone in the fast food arms race?

Can’t wait until the next phase of their technology rollout where BK partners with Amazon once they get their drones approved so I can just get Whoppers air-dropped directly into my home on demand. The only thing left after that will be to outsource the chewing of the food.

(Apparently BK’s been dabbling in online delivery stateside since 2012? My fast food game been lagging. Has anyone tried this?)

The lifelong dream of ordering, receiving and consuming a Whopper without putting on pants can now become a reality for residents of the United Kingdom.
(http://time.com/3714914/burger-king-order-online/)

Too Stoned? Order Your Whopper Online!