In regards to cannabis, New Hampshire is behind it’s North East neighbors. The surrounding states have passed laws to fully legalize cannabis or are on their way to doing so. Vermont legislature just approved legal cannabis. Both Maine and Massachusetts voters passed legalization measures within the last year. The area around New Hampshire are slowly turning green. New Hampshire has a chance to hang on to the Green Rush by passing the current decriminalization bill.

The New Hampshire House has voted numerous times over the last decade to decriminalize cannabis. The Senate shot the bill down every time. That is, until last Thursday. The Senate reached a compromise with the bill that the House presented. According to the bill, those above the age of 18 possessing three-quarters of an ounce of cannabis would be guilty of a violation.The first and second offenses would carry a fine of $100. The third offense could present fines of up to $300. If one were to be slapped with a fourth charge, they would receive a Class B misdemeanor. Police officers would no lon 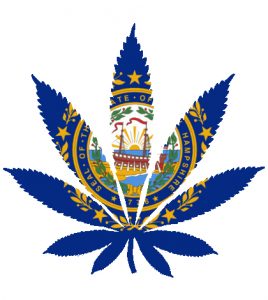 ger be able to arrest citizens for cannabis possession. The bill requires fine money collected from cannabis violations be deposited into the state’s fund to combat alcohol and substance abuse.

Some, such as Senator Martha Hennessy understand that with current laws are outdated. New Hampshire residents can lose everything from their children to their jobs to their homes if found in possession of cannabis. Extreme penalties include not being able to adopt children or even losing the right to vote in elections. Hennessy also believes that the “gateway drug” myth is false. “Marijuana is a safer alternative,” she persisted. Other senators unfortunately don’t share her view.

Sen. Bill Gannon wanted to lower the amount allowed from three quarters of an ounce to half. He doesn’t agree that legalization of cannabis could help the opiate crisis. The city of Manchester, NH is in the top percentile of cities with severe heroin addiction issues. His argument was that decriminalization will set back the work done to right the heroin epidemic He also exclaimed that, “My greatest concern facing this legislation would be the potential consequences it could hold for our youth. This is obviously the wrong message to send to my children and the children of New Hampshire.”

Another concern of Gannon’s on Thursday was the stoned driver. There is no way for officers to officially tell if a driver is stoned or not. Gannon claims that a “family can be wiped out by a stoned driver who a police officer let go with a violation.” Alcohol still presents far more of a problem than cannabis behind the wheel. Heroin is also more common in traffic accidents than cannabis. Two years ago in New Hampshire a man overdosed on heroin while driving. He was behind the wheel of his car in the middle of an intersection during rush hour. The police didn’t arrest him. He walked away after receiving Narcan. Stoned drivers are out there every day, commuting to work while jamming out to their favorite songs.

Other senators feel that decriminalizing the plant will hurt the state’s ability to attract business. Government officials should be doing everything they can to draw people to the small state. Liquor stores off of the highways don’t count. New Hampshire’s most well known monument took a dive a couple years ago. The state does have beautiful landscapes but so do Maine and Vermont. Maine and Vermont also have legal, high quality cannabis, which will draw away younger tourists. Younger residents of New Hampshire are leaving the state, looking for greener pastures.

Individual states are changing their cannabis laws. Colorado and Washington have not collapsed. The states are doing extremely well with the influx of new money. The decriminalization bill in New Hampshire is a small step. It is a move in the right direction. Maine, Massachusetts, and Vermont may see a steady influx of New Hampshire residents. The Granite State still has a while to go before it’s citizens get access to legal cannabis.