Indica: noun 1. a type of marijuana plant that provides a potent body high

Example: “I prefer indica strains because they help me sleep.”

Characterized as shorter, bushier plants with thick, broad leaves providing a body high that can feel heavy and relaxing.

They can be found naturally in the mountains of India, Pakistan, Afghanistan, Western Asia, and in some parts of the United States. The New Latin etymology of the word “indica” comes from Inducus which is defined as “pertaining to India.” As one of indica’s countries of origin, this seems to be an apt title for this heavy hitting type of marijuana.

One of the most popular and familiar strains is the kush plant and its many derivations. The kush plant was named after its region of origin which is the Hindu Kush Mountain Range that spans across Pakistan and Afghanistan. Pure indica is not a hybrid or sativa and will probably send you crashing if you are not accustomed to its heavy feeling. Unlike the uplifting feeling of cannabis sativa, indica slows down the body and mind, which is most desirable to those who are using marijuana for medicinal purposes. One of the most common descriptions of an indica high is “couch-lock.” Somewhat self-explanatory, this term indicates that once you hit it just hope you don’t have anything important to do afterwards. If you smoke to relieve pain or go to sleep, indica is the right choice as it generally has a higher THC and CBD content than most sativa strains. While CBD is not the psychotropic ingredient in marijuana, it is the most beneficial to your health. Indica strains are best used to relieve insomnia, multiple sclerosis, nerve damage, migraines, anxiety, chronic pain, appetite loss, glaucoma, cataracts, asthma (when used with a vaporizer or Volcano), chemotherapy, Parkinson’s disease and many, many other ailments. Indica strains are also most commonly used for the cultivation and production of hash and other marijuana concentrates, as indicas tend to have the highest THC and CBD percentage.

There are many types of pure, single strain indicas, Northern Lights being one of the most popular and most beloved, but the majority of them are hybrid. They will often be referred to as an indica dominant hybrid.

This means that both types of marijuana can be felt but the indica percentage is higher and felt more. There are some hybrids that are a double cross, meaning that they are 100% indica, but not a single strain. At medical marijuana dispensaries, they will often be listed under the indica section even though they are technically hybrids. Many dispensaries choose this classification for the sake of convenience as most patients do not care if it is a single strain or hybrid indica, as long as it gives them the desired effect. The mixing of indica and sativa and then even further crosses is what produces many of the strains we have today. Still there is nothing like lighting A joint at end of a long day. 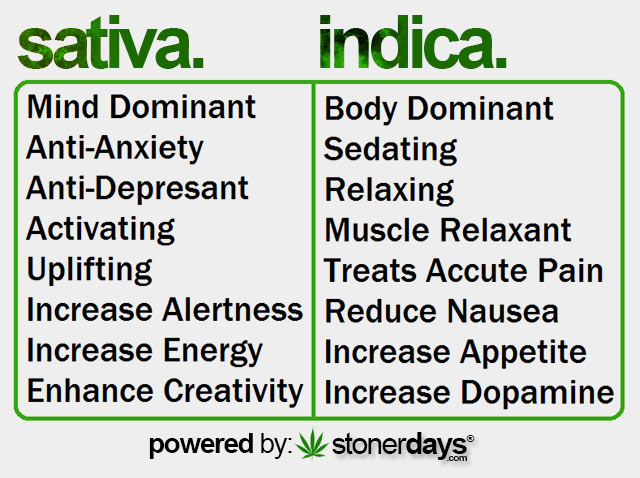