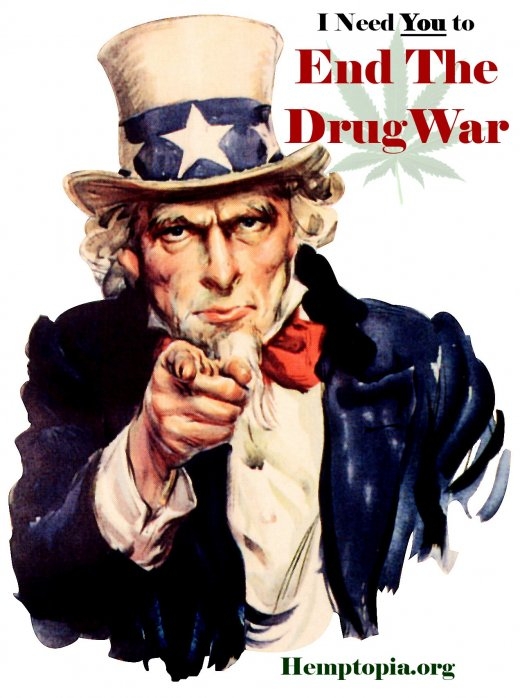 How To Help End The War On Drugs

Steve Elliott, who is author of The Little Black Book of Marijuana, editor and host of Toke Signals, and a leader in the effort to end the War On Drugs, helped with the resources and the groups you need to know about to get involved and join this effort.

From leaders in the effort to How To Help End The War On Drugs:

Chris Butts, AMMJC: “There is a need to keep the conversation on the legalization of marijuana going”
[Chris Butts]

As far as the War On Drugs, although the messages and purposes are different between groups, there is a need to keep the conversation on the legalization of marijuana going.

The biggest thing we can do as individuals is talk to the people in our groups and circles about the issue. We also need to sign those petitions that go to the legislators.

When they go around, sign them, and when another one comes around worded a little different, sign it, too. The same goes with the letters and the phone calls. They all help.

A display of unity and numbers will help to get the message out there.

James Bell, Georgia CARE:
“We need the neck-ties and the tie-dyes both”
[Jim Burress/WABE]

There are different levels of activism and different things that need to be done to make changes in these laws. We need the neck-ties and the tie-dyes both. There are street activists and there are Internet activists.

Staffing a booth at a flea market can help get the message out. But stopping by that booth and donating a few dollars, whatever you can afford can also help. Getting on social media, such as Facebook, and posting to build awareness of what is going on is another way to help stimulate action on the issue.

Dean Sines looks exactly as you would expect a marijuana activist to look. With long hair and hippie garb sporting tie-dye and green leaf marijuana motifs, he is a walking conversation piece, and he deliberately dresses that way to educate and inform the public on cannabis.

Whereas this might not be something you wear to work, if the opportunity presents itself to draw attention to the issue and start discussion, and you are comfortable, according to Sines, “Ten people who lift their voice on an issue can make more noise than 10,000 who are silent.

“At least you can make people think.”

Steve Elliott, Toke Signals:
“It’s hard to beat someone who has nothing to lose”

When one takes the lead, other states will soon follow. When enough people come together, change will be inevitable.

Today, many people who are supporting the legalization of medical marijuana are actually fighting for their lives. It’s hard to beat someone who has nothing to lose.

But as to the War on Drugs, we can’t sit around and wait for legalization to happen. It is like a dance: When one person finally gets up to break the ice, it is a lot easier for others to get out there too.

A bulleted list of ways you can help and join in the effort to help end the War On Drugs:

Note: We are all at different times and situations in our lives. Think about what is realistic for you and what is in line with your own talents, resources, physical abilities, family demands, and sometimes even your job and career demands and requirements. Then do what you are realistically able to do to help end the War On Drugs.

• Make your voice heard and the issues known.

• Keep the discussion going. Talk about the War on Drugs with your friends and family.

• Do what you can to build awareness.

• Comment on the related news articles on news sites and discussion boards. Be polite, keep it friendly and provide good useful and factual information.

• Write letters to the editor.

• Write letters to your representatives and let them know how you feel about these issues.

• Make phone calls to your representatives and let them know how you feel about these issues.

• Volunteer with one of the advocacy groups or organizations.

• Get on their email lists so you can keep up with what is going on.

• Connect with the various groups and like-minded individuals on Facebook and other social media.

• Make a donation. Even if it is only a dollar or two, every little bit helps. (If you are in a position where you cannot be openly supportive, anonymous donations are always welcome.)

• When you see a booth, stop by, say hello and show your support. This is also a time when you can leave a donation, even if it is just the change in your pocket, every little bit helps.

• Volunteer to man (or woman) a booth.

Advocacy groups working to end the War on Drugs:

Alabama Medical Marijuana Coalition (AAMJC) — Because science says marijuana is medicine and it always has been.

Alabama Safe Access Project (ASAP) — Dedicated to the principle that current marijuana policy in the state of Alabama is ineffective and causes more harm to our society than good. Their primary concern is providing safe access to patients who choose to use a safe natural alternative instead of more dangerous chemical pharmaceuticals.

International Centre for Science in Drug Policy (ICSDP)— Network of scientists, academics, and health practitioners committed to improving the health and safety of communities and individuals affected by illicit drugs. ICSDP conducts original scientific research with leading scientists and institutions across diverse continents and disciplines.

Law Enforcement Against Prohibition (LEAP) — Current and former members of the law enforcement and criminal justice communities who are speaking out about the failures of our existing drug policies.

Marijuana Policy Project (MPP) — Because MPP believes that the greatest harm associated with marijuana is prison, they focus on removing criminal penalties for marijuana use, with a particular emphasis on making marijuana medically available to seriously ill people who have the approval of their doctors.

Moms for Marijuana International — A grassroots network of parents and other citizens across the world, who are concerned with the ignorant war that continues to be fought against the cannabis plant and how it is negatively affecting the future generations of this earth. They focus on raising awareness, promoting education, and creating discussion in local communities.

National Organization for the Reform of Marijuana Laws (NORML) — Working to reform marijuana laws. They have an interactive map and a drop down menu. You can click here to find a chapter near you.

The Silver Tour – Teaching Seniors the Benefits of Medical Marijuana. To educate and inform seniors on the benefits and discoveries in the medical cannabis field. To encourage activism for legalization and create demand for safe access.

Students for Sensible Drug Policy (SSDP) — Led by a student-run Board of Directors, SDDP is the only international network of students dedicated to ending the War on Drugs. At its heart, SSDP is a grassroots organization.

News and information sites dedicated to the War on Drugs:

Cannabis Nation Radio — A top source for an honest conversation about hemp, cannabis and marijuana.

Hemp News — Campaign for the Restoration and Regulation of Hemp.

NORML Big Book of Marijuana Facts — NORML’s collection of the most up-to-date statistics and polling on the subject of cannabis and marijuana law reform. Journalists, researchers, students, and activists are encouraged to copy and distribute the charts and data from this site, so long as material remains unaltered and unedited.

Regina Garson wrote this article; it originally appeared on her blog