Did Aaron Hernandez kill his Bluntmaster?

As the trial of Aaron Hernandez draws to a close and the jury deliberates, it’s becoming clear that as prolific his talents were on the field as a tight end, even more prodigious was he in his other extracurricular activities – especially his enthusiasm for weed.

Let’s examine some of the evidence.  Your Honor, may it please the court to present the defendant’s fantasy weed smoking statistical averages:

Well then.  (Gatorade’s probably thinking to themselves right now: ‘Dammit – missed opportunities on getting him to endorse our stuff for all the cottonmouth he must be getting.  Probably even more parched from blunt smoking than practicing.  Unleash that power from within after the next sesh!  Oh well…there’s always Weed Olympics 2030.)

What’s the old saying, an ounce a day keeps the commish at bay?

Let’s say that averages out to a nice even 30 blunts per day (reminds me of the time I once lived with a guy who would only smoke blunts – Dutches for days).  Assuming a 5 minute roll time per blunt, that’s two and a half hours taken up right there!  Ain’t got time for that with practice and game film and actually smoking the weed.  He probably saw the Seinfeld rerun where Kramer gets the Dominicans to roll his ‘Cubans’ and got inspired after Belichick just finished drilling into them at practice that day the importance of efficiency and getting the most out of every situation. 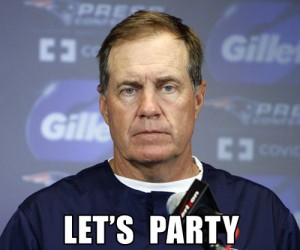 Would you want to be the one to disappoint the leader of men that is Coach Belichick?  No way any player on the team wants to be the weak link in the wolfpack.  This particular wolf just needed to get really, really high every day to be the best wolf he could be.  Whatever gets you through the wolf life.

Imagine if he’d actually been on the payroll.  The defense could break out Odin Lloyd’s W2 forms: ‘Aaron Hernandez Executive Gardener’.  “Why would he kill his own gardener – do you know how hard it is to find a good gardener these days??” 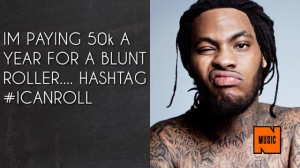 Odin Lloyd was known as a CFL player with greater aspirations to ball on a grander stage, but may well have been an unsung Tom Brady in the herbal craftsmanship department.  Probably not the legacy he envisioned leaving behind, but having the fate of a man hang in the balance over how devastatingly good your blunt rolling technique was definitely merits a stoner achievement award.

“Aww shit…Yo man, I can’t do this – got too much love in my heart for homie’s blunts.  Let’s go back and kick it at my flop spot with Boss Lady so you can roll me up one of those tasty bluntmaster specials and forget we ever took this ride.”